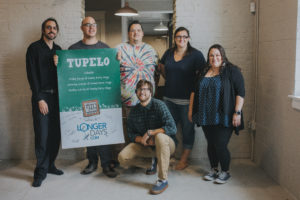 LongerDays team members were recently polled to gather opinions about the company’s mission. We asked each and every employee, “What are the guiding values of LongerDays?”

While many of the responses were related to positive business practices and serving clients, one that stood out was the goal to “Make Muskegon Better.” If you didn’t already know, the LongerDays office is located in Muskegon, MI – and many of us were born and raised in the area.

Digging a little deeper, we discovered that many members of the team show how much they care about their community with volunteer efforts on their own time.

Volunteering in Arts and Humanities

Many of the team members at LongerDays are passionate about the arts. We see the arts (of all kinds) as integral to creating a well-rounded community, and the cornerstone of a city that we would want to live in.

Several people on our team volunteer, some year-round, with the Muskegon Irish Music Festival. This festival highlights all aspects of Irish culture, including music, dance, art, literature, and sport, and also heavily invests its resources back into the community. Andrew is the festival’s Production Manager, Travis helps with the sponsorship display signs on the festival grounds, Emily lends a hand with volunteer coordination, Chelsea is on the social media team, Colton is part of the stage crew, and Jason does graphic design!

In the meantime, Mike can be found often donating his talents as a drummer to various benefits and organizations in the area, and Emily is part of a folk music duo that plays benefits for various community projects through the summer in the Muskegon area.

Andrew also can be found volunteering his time with the Muskegon Civic Theatre on their Board of Directors. He also works as the director of Student Showcase, an event that gives area high school students an opportunity to show their skills in performing, literary, and visual arts as well as academics and athletics. Students are not only given an outlet for creativity in the arts, but also awarded scholarships to encourage higher education.

Jason also volunteers at Burning Foot Beer Festival every year, helping to build infrastructure and assist brewers. Burning Foot has helped to put Muskegon on the map as a destination for craft beer drinkers, and would not be possible without the volunteers like Jason!

Colton spends his volunteer hours with the ACWL (Arts Council of White Lake) teaching writing and theatre classes for younger children, as well as serving on their marketing committee helping to proofread press releases, review flyers & advertisements, and making their content all around easier to digest. Colton sees his time with the Arts Council as a way to positively impact area youth, as well as reach into the community to inspire folks who don’t normally interact with the arts!

LongerDays virtual assistants are also passionate about youth development. Muskegon is a city with tons of kids, and they often do not get the attention they need. That’s why Morgan volunteers with the Muskegon Boys & Girls Club, helping to mentor kids in their after school program. She serves in the same school district she graduated from, and thinks it’s important for people to give back to their community, specifically the marginalized populations. Morgan also volunteers to mentor youth in STEM (Science, Technology, Engineering, Mathematics) subjects, introducing underprivileged children to different tech fields.

Jason likes to spend his time volunteering with the Boy Scouts of America, where the troop he works with does many service projects around the city of Muskegon. They help with setup and teardown of many different events around the city, as well as volunteering on a historic WWII boat that is here in Muskegon, the LST 393. Jason sees his service with the scouts as a way to inspire young people with civic duty and lead by example, just as adults were examples for him growing up.

Michigan is a place of great natural beauty, with important resources that rival those anywhere else in the world! This may be why LongerDays staff members are so passionate about the environment – and preserving it for generations to come.

LD owner Jason Pliml (we’ll call him JP for the sake of differentiating) feels very passionately about the outdoors and environmental preservation. An avid kayaker, JP volunteers to help with river cleanups – and bring his kids along. When asked why he brings his kids, he says that he hopes to instill a sense of stewardship of the environment. JP feels his community is very important, and proves it with his actions, as well as his words and ongoing advocacy.

Alternative transportation is another environmental advocacy activity that many people at LongerDays participate in. Approximately half of the staff at longer days find alternative ways of getting to work besides driving a car. Some walk to work, some skateboard, and some ride bicycles. One LongerDays employee, Travis, spends volunteer time organizing community bicycling rides for all levels of riders. He sees increasing bicycling culture as important to how a community will be shaped, particularly how safe roads will be.

It is no secret that the Muskegon community is home to some marginalized people. For a town its size, there is quite the homeless and hungry population, ranging from children to the elderly. Thankfully, there are employees at LongerDays who feel very passionately about social and humanitarian issues.

We recently started helping with Kids Food Basket, a non-profit local to Muskegon that assembles sack lunches for children who may not get a lunch otherwise. They will also send kids home with extra bags, so they have something for dinner as well.

The organization asks different groups to draw on the brown bags so the kids have something personalized. As an office, we will draw and color on bags and bring over a stack every few weeks. One of our team members, Ashley, was so inspired by their mission and vision that she decided to start volunteering on her own time with the organization, helping to pack lunches for a few hours a week. Having a young child of her own, Ashley was moved to act at the mention of hungry kids in our own community.

Muskegon Irish Music Festival is also active in helping to feed the hungry. The festival helps by collecting canned goods at the festival entrance to donate to a local food pantry, as well as making monetary donations to different food pantries in town: since 2008, MIMF has given back over $182,000 in cash and more than 14,000 pounds of non-perishable items to local Muskegon food pantries. Andrew, Jason, and Travis (among other staff) all see the mission of fighting hunger as one of many great reasons to volunteer with the Muskegon Irish Music Festival.

Because of his passion for his community and fighting homelessness, Travis also serves on the board of a local non-profit called Community enCompass, who, among many other programs, helps advocate for homeless people, helping families and individuals get into safe and affordable housing.

Here at LongerDays, we have a deep sense of civic responsibility, shown through all these different efforts that our team members give their time to, unasked – all because they see them as something important to our city. They see an unmet need in their community, and believe in the LongerDays value of “Make Muskegon Better.”

We strive to make Muskegon a better place for children, for adults, for the homeless and hungry, for the active, and for the creative. A thriving community is great for everyone!