LongerDays is truly lucky to have an office space here in the Russell Block, nestled in the heart of downtown Muskegon. It’s a privilege to work in a building that survived through so many decades of change in our city.

Sitting at my desk, surrounded by people hard at work, I can’t help but smile. We live next to a pristine freshwater lake with virtually untouched beaches (compared to the popular spots on the West Coast). We work in a beautiful area… In a growing city with so much potential.

With one glance at the Russell Block Market building, it’s easy to see that it has been around for some time – not in the sense that it’s falling apart, but quite the opposite! The architecture facing Western Avenue is absolutely gorgeous, and arguably one of the most attractive sights to take in as you stroll up the main drag. It’s got that old school beauty that, well, they just don’t make anymore! 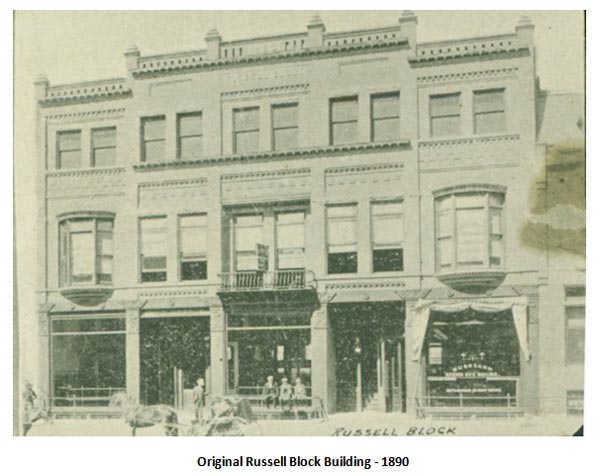 The building was constructed in 1890, sharing a wall with the impressive Century Club, Muskegon’s first upscale social club to surface downtown.

You certainly can’t tell now, but back in 1923, this building suffered a terrible fire that destroyed the basement. Battery acid from telegraph equipment fed the blaze, yet the structure survived!

Then in 1946, much of Western Ave. was engulfed in flames, destroying so many buildings and businesses that had built their homes here. Muskegon pressed on…

From raging fires to business leaders forging ahead, the Russell Block has seen both demolition and creation.

In 2011, the Russell Block building had been sitting vacant for too long. Community leaders at Port City Construction and Development were ready to restore the building, which served to jump start a new era for our downtown hub. They took the bones of a historic space, and created what is now the Russell Block Market.

It took years of reconstruction, but the building was finally restored back to its original look. Upon completion, businesses began to move in. If you find yourself at 360 Western Avenue today, you’ll see Unruly Brewing, Rebel Pies, and Drip Drop Drink all on the first floor.

The Place To Be

With a brewery, pizza joint, and coffee shop all sharing the ground floor, there is no arguing that the Russell Block has become one of the most popular places to be for a broad range of people.

It’s refreshing to see the demographic collage enjoying what this building has to offer. If it’s not a group of friends stopping in for a beer and a slice on a weekday afternoon or nightlife seekers for a Saturday rock ‘n roll show, it’s a couple showing up in their Sunday best, heading up to the second floor to see an event at The Block – a unique concert hall that hosts a slew of engaging jazz, classical, and world music performances – and more!

The Movement of The City

When you spend time here, you just get a sense that things are happening. People are hard at work, and playing just as hard. In our city, there is a hopeful and progressive spirit. Without the Russell Block, we wouldn’t have a clear hub, or a center for our collective excitement.

We see new businesses surface more and more frequently, and more people are taking advantage of this beautiful area. We’re only moving forward, and I think this momentum is largely due to the developments that began right here in this building.

A Place To Belong

I am proud to say that I work in the Russell Block Market, and I’m honored to be a part of the growth that is happening in my hometown. After all, if you don’t love where you came from, how can you ever really appreciate where you’re going?